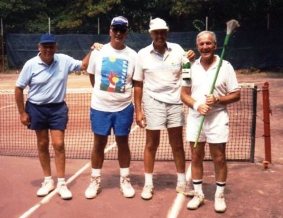 Jim Oliver (second from right) and buddies, circa 1991. Note the champagne bottle!

After playing tennis for many years, starting in the early 1960s, my father, Jim Oliver, decided to build two red clay tennis courts of his own. He just happened to own a very level piece of land that was adjacent to Route 6 – the main artery of Cape Cod in Wellfleet (the quiet end of the peninsula).

Jim Oliver relaxes with his friend Ralph Johnson, circa 1987. An hour of singles was only $8.00!

This piece of land had been carved out of a small hillside and leveled-off to serve as a clay and sand “pit” for the Highway Department. I spent many hours with my siblings playing amongst the scrub pine in the “Sand Pit”. The Pit was where Courts 1 and 2 are today. Originally Court 2 was called Court 1, as it was the first to be built. When Courts 3 and 4 were added two years later in 1971, the numbers were switched on the first two courts to lessen confusion.

As the tennis boom of the seventies continued so did the expansion of Olivers Tennis. In 1975, Courts 5 and 6 were added and finally, in 1977, Courts 7 and 8 completed the picture. Olivers’ Tennis consisted of 7 red clay tennis courts and 1 hard court.

Concerning my father’s creation of the tennis courts, there are three elements that stand out the most. First, he wanted the courts to always be in impeccable condition and well maintained. One of the main ways he achieved this goal was by insisting the courts be swept every time there was a change-over. We did this for 28 straight years! That’s a lot of sweeping – good thing I have a lot of siblings.

Second, my father made a decision to stagger the starting times on the courts. This was done primarily to allow us to sweep the courts after each change-over. As it turns out, it is also an amazing example of how effective Queue Theory can be, especially in regards to handling customers and the parking lot.

The shack with Mom’s wonderful flowers.

Third, is how my father set up the layout of the tennis courts. Courts 1 and 2 are side-by-side. On a lower level are Courts 3 and 4, side-by-side. Courts 5 and 6 are on a still lower level, side-by-side. Lastly, Court 7 is by itself and Court 8 is by itself. This arrangement lends itself to a very intimate setting and a sense of privacy when playing.

Though I don’t sweep the courts at every changeover anymore, the courts are still in great shape. Hopefully, you will come and check them out. Tennis doesn’t get better than tennis on very well maintained red clay tennis courts.